Introduction^ Back to top

This Second Data Release begins SkyMapper's exploration of the deep Southern sky. DR2 includes the first release of images from the Main Survey (with exposure times between 2.5 and 20 times longer than the Shallow Survey, depending on the filter), as well as a larger Shallow Survey dataset, image processing enhancements, and a refined photometric calibration. Included are fields observed between March 2014 and March 2018, with a number of quality cuts applied. Measurements from over 4.7 billion detections covering over 21,000 deg2 of sky are available. They correspond to over 500 million unique astrophysical objects from magnitude 8 to 22. All magnitudes reported on this site are AB mags.

Please address all feedback, suggestions, and bug reports in the first instance to skymapper@anu.edu.au.

What type of data is provided?^ Back to top

DR2 contains reduced images with overscan, bias, flatfield correction and a World Coordinate System (TPV projection) applied, as well as photometric catalogues (both raw detections and object-merged) for objects in each image. Full access to the DR2 database tables is provided through this website and the Virtual Observatory Table Access Protocol (TAP).

Five SkyMapper-specific database tables have been exposed in this data release:

The dr2.master table has been pre-matched to several other large catalogues:

Matching to the external tables was attempted with a 15" search radius around each SkyMapper source and the ID and distance of the nearest source from the 2MASS, AllWISE, Gaia DR2, GALEX, PS1, and UCAC4 catalogues are noted in the last set of columns in dr2.master. In contrast to DR1, only the 2MASS PSC was queried (instead of both the PSC and XSC), while for Gaia DR2, the two nearest matches from the catalogue are listed. The distance to the 2nd-nearest match may indicate the presence of a close neighbour affecting the photometry of the primary source (also see the prox column in dr2.master for the closest DR2 source to each DR2 object). The ext schema also contains additional catalogues that have not been cross-matched with DR2.

We also provide local copies of several spectroscopic and other catalogues, which we have pre-matched to the SkyMapper master table with a 15" search radius, noting the nearest SkyMapper source in the dr2_id and dr2_dist columns of those tables:

To aid in constructing your ADQL queries, you can browse the column metadata of all these tables here.

Sky Coverage and Data Quality^ Back to top

The 121,494 images in DR2 are comprised of 70% Shallow Survey (SS) and 30% Main Survey (MS) frames. The maximum photometric zeropoint (the magnitude equivalent to one detected count in the image) is shown in each of the 6 sky maps below (in which darker colours are deeper images), illustrating the relative proportion of Shallow Survey and Main Survey data available for each filter.

As the maps make clear, Main Survey imaging in i- and z-band has covered >80% of the Southern sky, although not yet with the final number of visits. The iz images have largely been obtained in twilight, but the other filters require gray or dark time to limit the effects of sky background in the deeper images of the Main Survey and therefore progress has been slower.

Median point source completeness limits are more difficult to estimate than in DR1, owing to the mixture of exposure times and number of visits for each field. The logarithmic number counts of sources with < 5% errors are shown in the figure below, with the bimodal distributions reflecting the Shallow Survey and Main Survey components. 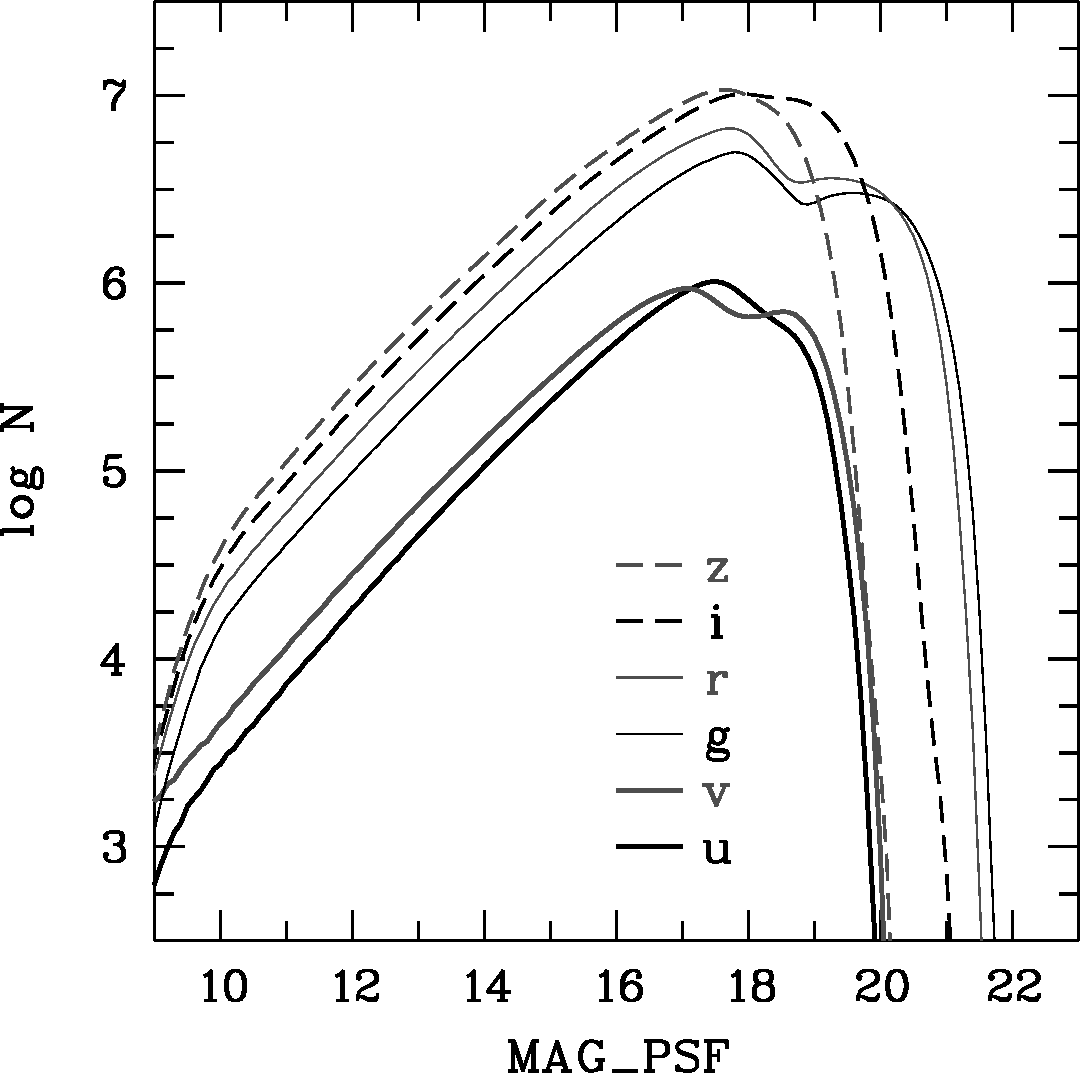 All source detections in the photometry table include the Source Extractor flags, complemented by additional flags from our data processing in a higher bit range:

Our post-processing adds the following flags, as needed:

Only detections with flags<4 and nimaflags<5 are used for the distill into the master table. Hence, the averaged magnitudes exclude all measurements with bad flags, and the master source list excludes all objects within the exclusion zones around bright stars. However, detections with bad flags or those close to bright stars can still be found in the photometry table.

For TAP queries, some definitions and constraints worth considering when making selections from the dr2.master catalogue include:

Improvements of DR2 over DR1^ Back to top

Several changes in the data processing have improved the quality of the DR2 data products: 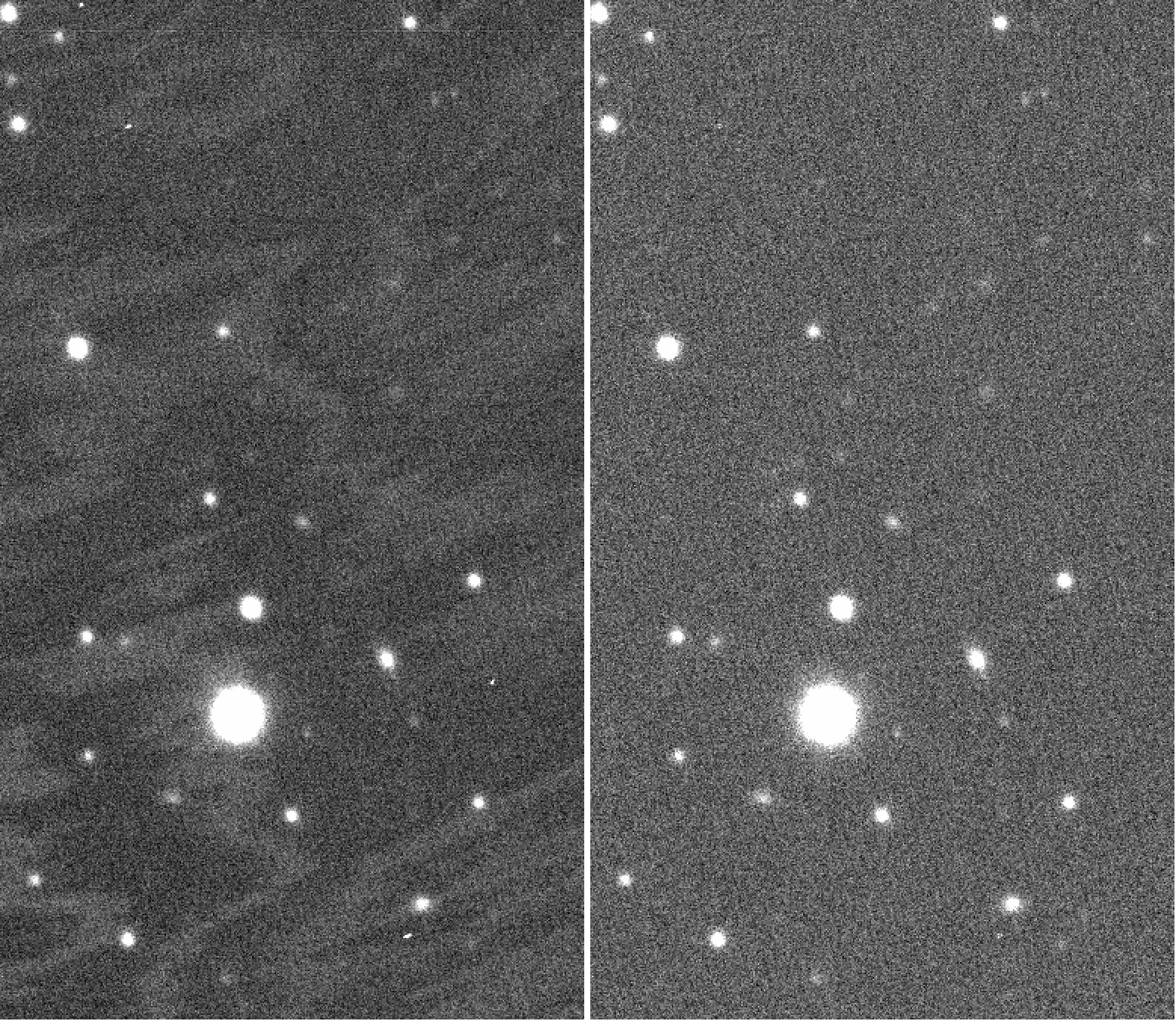 Caveats and Known Issues^ Back to top

For an up-to-date list of known issues and their prospects for resolution, please see the Known Issues section at the bottom of this page. There are several important issues with DR2 data to be aware of:

SkyMapper Detectors^ Back to top

The SkyMapper mosaic camera contains 32 CCDs of 4096 x 2048 pixels with a plate scale of ~0.50 arcsec/pixel. There are small gaps between the individual CCDs and the resulting field-of view is 2.37 deg x 2.39 deg. The mosaic fill factor is 91% of a 5.68 deg2 field-of-view. Each SkyMapper image is split into its 32 constituent CCDs, which are presented as separate files to the image cutout service. 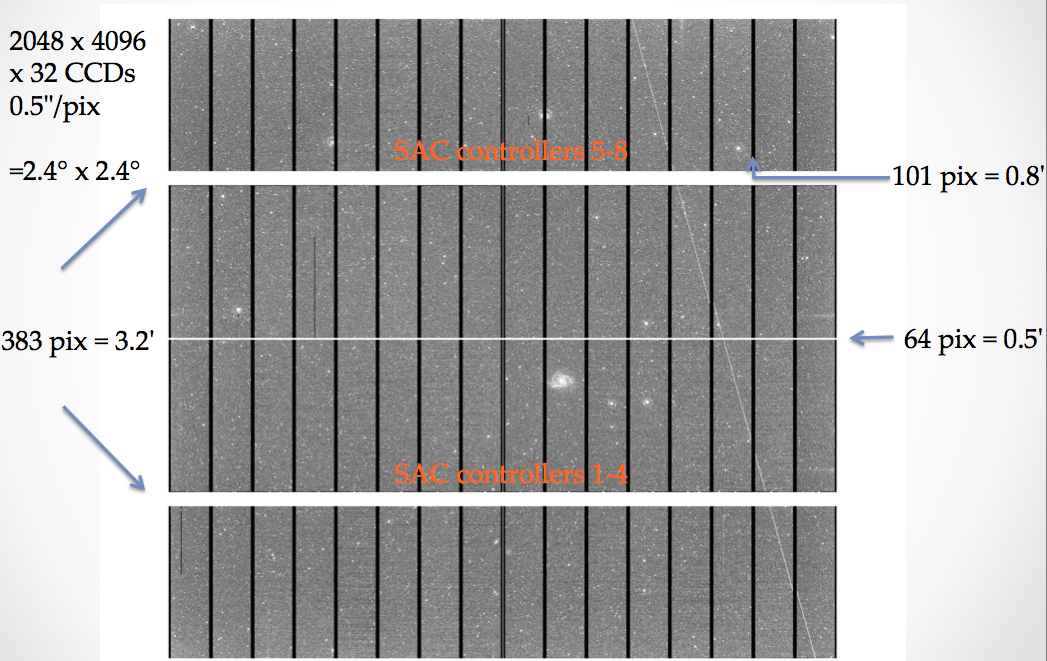 SkyMapper Filters^ Back to top

The SkyMapper filter curves (with atmosphere) are shown below. We have tabulated colour transformations between SkyMapper and other standard filters, as well as predicted star colours and reddening corrections -- they can be found on the page here. 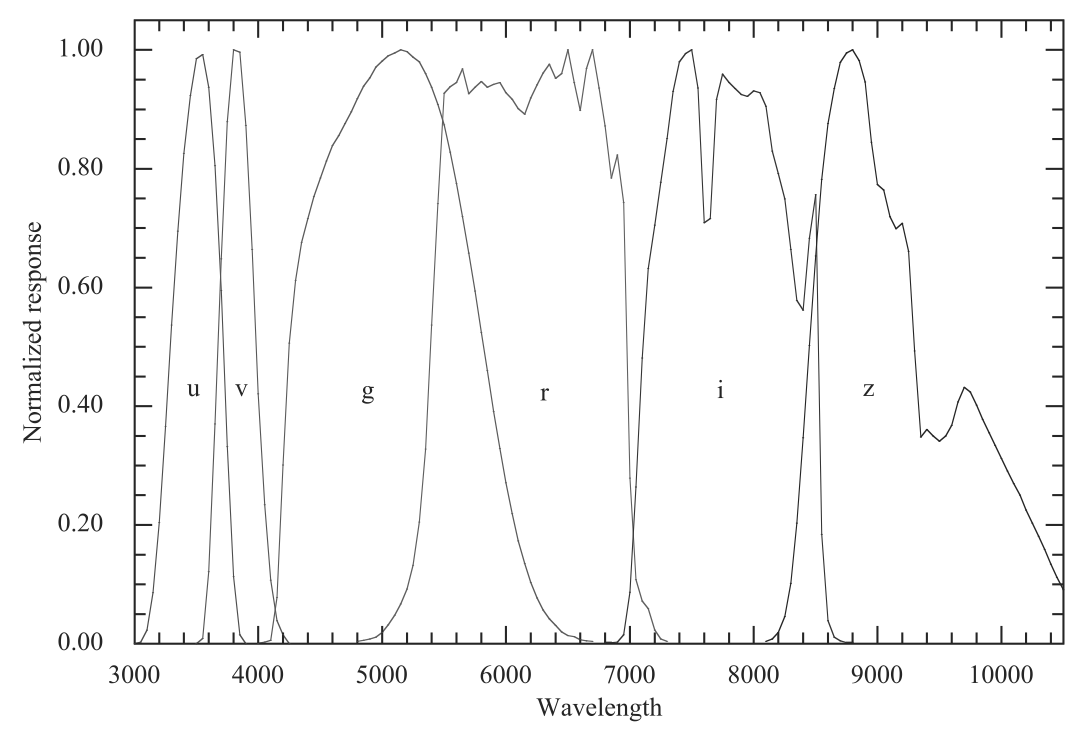 Note that the u-band filter (ultraviolet) is shortward of the Hydrogen Balmer break, while the v-band (violet) is placed between the Balmer break and the Ca H&K 4000AA-break. The u-filter also has a red leak, which needs an airmass-dependent correction. The two lines shown in the figure below are effective transmission curves including atmosphere for airmasses 1 and 2. The third (inset) panel shows the difference between the apparent u-magnitudes observed at airmass 1 and airmass 2 as a function of star colour. The redder the star the brighter it appears in u-band as it is observed closer to the horizon, because calibration stars get fainter, while the red leak keeps the flux bright. Additional information on the filter set can be found in Bessell et al. (2011). 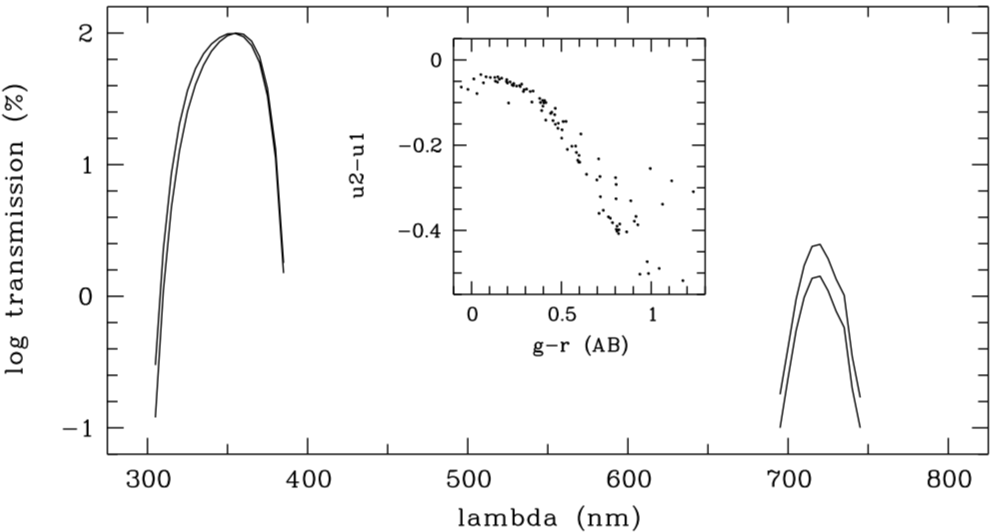 World Coordinate System^ Back to top

Reduced SkyMapper images provided through this website and the SIAP service have been registered onto the sky using the TPV World Coordinate System (RA---TPV, DEC--TPV). TPV builds on the standard TAN projection by adding a general polynomial distortion suitable for wide-field cameras which is described in a set of additional PVi_m keywords. A typical TPV header is reproduced below:

As TPV is a relatively recent WCS parameterisation you may need to update older WCS libraries and software for best results. We have confirmed that TPV is supported by the following libraries and tools:

Note: older versions of Montage (<=3.3) include wcstools v3.8.1 so this library must be updated to 3.8.4+ prior to compiling in order to support TPV.

Astrometric Quality^ Back to top

The astrometry for DR2 is based upon the UCAC4 catalogue (Zacharias et al. 2013). As validation of the astrometric solutions, the sources from the DR2 master catalogue have been cross-matched against the Gaia DR2 catalogue. As with DR1, the median offset is 0.16 arcsec. The sky distribution of the median Gaia offsets per deg2, on a scale of 0 (white) to 0.25 arcsec (black) is shown below.

Known Issues | DR2^ Back to top

Click on the table headings to sort the table based on that value.